Kumdo is a modern Korean martial art originating from Japanese Kendo. Though romanized in a number ways when written Kǒmdo or Gumdo the meaning remains “the way of the sword” and is cognate with the Japanese term. As a martial art, Kumdo has become accepted in Korean culture and society since its introduction from Japan to the degree that the term “Kumdo” has, in recent history, become a generic label for other Korean martial arts based upon swordsmanship. As a result, caution should be exercised to avoid confusion among practices espousing martial (ie, Hankumdo) rather than sporting and competitive goals. Although related to Japanese Kendo, minor differences exist in Korean Kumdo due to appropriation and acculturation. Such differences include, but are not limited to, the use of native terminology, the use of blue flags rather than red flags for the referees and minor modifications to the uniform. 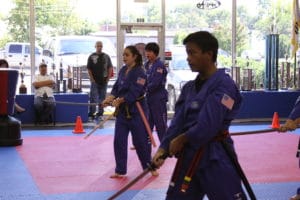 In April, 1895 the Dai Nippon Butoku Kai (DNBK) was established in Kyoto, Japan for the preservation of older Martial activities such as sword, archery and unarmed combat. Swordsmen in Japan had established schools of kenjutsu (lit: “sword techniques”) over centuries of military heritage and this material formed the basis for the DNBK swordwork. In particular was the use of bamboo practice swords (shinai) and armor (bōgu) to sword training attributed to Naganuma Shirōzaemon Kunisato during the Shotoku Era (1711–1715). In 1896, the DNBK expanded to Korea as the Dai Nippon Butokukai – Choson-bu (Korean Branch) under Nakamura, Tokichi. Japanese Swordmanship Kenjutsu, like Judo, was adapted to the Japanese educational system in 1911 at the prodding of Naito Takaharu and Isogai Hajime, both of the DNBK, since the use of a pliant bamboo sword and padded armour allowed competitors to strike each other with sword techniques in greater safety. The DNBK changed the name of this sporting form of swordsmanship, first called gekiken, (Kyūjitai: 擊劍; Shinjitai: 撃剣, “hitting sword”) to Kendo in 1920. Korea, then subject to Japanese policy and administration (Korea under Japanese rule), also adopted these practices but often using Korean rather than Japanese terminology. Made a required course in Korean schools in 1939, Kendo continued to be taught until 1945. After WWII, Gumdo and Kendo diverged to form separate but nearly identical practices.