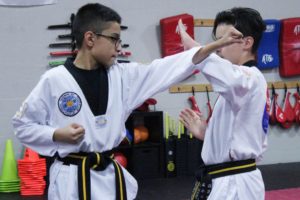 At Gallatin Martial Arts we focus on teaching sound and effective Taekwondo self-defense techniques to each student. We have classes that offer basic fundamentals, self-defense, competition sparring, hyungs forms, children’s and adult instruction. We encourage our students to attend as many classes as they can. Our goal is to teach each student to reach his or her maximum potential as a martial artist. 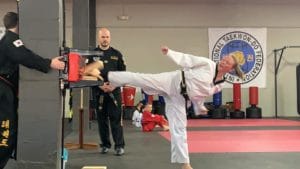 Taekwon-Do is a Korean art of self-defense. Contrary to the teachings of many of my fellow master instructors, practitioners and predecessors, Taekwondo did not originate thousands of years ago in ancient Korea. Rather, Taekwondo is a collection of similar unarmed martial arts techniques and foundations created by a number of Korean Grandmasters, including General Choi Hong Hi, when they returned to Korea from Japan following World War II. While in Japan, these Grandmasters learned Karate-Do (meaning way of China Hand or way of Empty Hand) and the techniques they learned formed the basis for a new martial art. On April 11, 1955, General Choi, then a general in the South Korean army, began to unify and systemize these related martial arts disciplines by giving Taekwondo its name and its beginnings. In 1961, General Choi became the first President of the Korea Tae Kwon Do Association, and until his death in 2002, he worked tirelessly and selflessly in the promotion of Taekwondo and in the scientific advancement of Taekwondo techniques.

Below you can find a more detailed list of the highlights of the development of martial arts on the Korean peninsula from ancient times until the present. As you will see, Taekwondo is not a martial art that was developed by one single person, nor can it be traced back to any one individual. Instead, Taekwondo is a discipline that has scientifically developed into a system of various theories, terminology, techniques, methods, rules and spiritual foundations. As a result, the discipline, or the Way, can be constantly improved upon by its senior practitioners and instructors. This flexibility allows my fellow teachers and I to teach the fundamentals of Taekwondo to new generations, and the next generation of teachers can in turn teach the Way of Taekwondo to following generations, in each case adapting Taekwondo to the changing times and students, while remaining true to the founding tenets. I consider Taekwondo to be a living art of self-defense that will continue to evolve for years to come.

It is an unfortunate reality that martial arts are often attributed to a single person or claimed by a particular nation. This usually results from the selfishness of individuals or the nationalism of governments, with something to gain by claiming that they practice the original or pure form of a particular martial art. In particular, dictatorships are prone to these types of claims. However, teachers of Taekwondo and other martial arts need to do their part to correct these misnomers by teaching their students the history of their particular style of martial arts. It is important that students be taught the truth about the fundamentals of the martial arts that they study, in order to get the most out of their training. It helps no one if instructors try to make martial arts the product of one nation or try to imbue martial arts with mythological backgrounds and lineages of thousands of years. 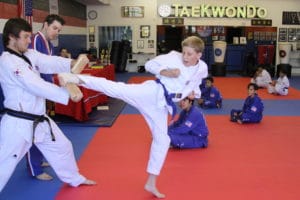 The following highlights the history of martial arts on the Korean Peninsula:

However, Olympic fame is not Taekwondo’s primary purpose. Perhaps traditional original Taekwondo may be better for the future.

Olympic Sport Taekwondo has developed in the decades since the 1950’s and has a different focus than traditional TaeKwonDo. In terms of its emphasis on speed and competition as an Olympic sport. Sport Taekwondo is derived from Kukkiwon, the source of the sparring system sihap gyeorugi which is now an event at the summer Olympic Games and the sport is governed by the World Taekwondo Federation (WTF).Sport TaeKwonDo emphasizes mostly kicks and sparring strategies with explosive speed. 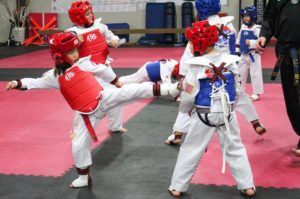 In Olympic Sport TaeKwonDo the main focus is sparring competition with taeguek forms and basic self defense. Sport TaeKwonDo is an exciting martial art for young children and young adults. There are even some universities that offer competition teams and several even offer grants and possible scholarships..

The basic objective of Olympic Taekwondo is to land kicks on your opponent’s electronic scoring zones: one point is awarded for a valid kick or strong punch to the torso, two points for a valid spinning kick, three points for a valid kick to the head and four points for a turning kick to the head. The action takes place inside a ring called a court, with each contest made up of three two-minute rounds. Over their standard white uniform, competitors wear protective equipment. (Chest Gear, Headgear, Foot and Hand Pads, Mouth & Groin Protection)

The eight Taekwondo events at the London 2012 Games – four weight categories for men and women – will be played in a knockout format. The winners of each contest will qualify for the next round, with the two finalists going head to head in the gold medal contest. All competitors who lose to one of the finalists will enter the ‘repechage’, which will eventually determine the winners of the bronze medals.

The United States Olympic Committee (USOC) recognizes USA TAEKWONDO (USAT) as the National Governing Body (NGB) for the sport of Taekwondo in the United States. A primary function of the NGB is to conduct national and international events in its sport. We are proud members of USATKD – USATKD & AAU